A Circle of Orange:Writing With Incarcerated Youth 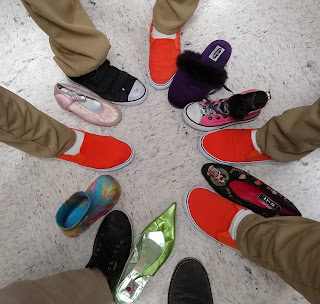 A circle of anonymous orange shoes.

At the end of September, I spent two days with the Ohio teens who wore these shoes.  If you asked me to describe the group to you, I would say that, as a whole, they were bright, chatty, and creative girls. They seemed like typical teenagers—like the daughters of your next-door neighbors.

Only they were incarcerated.

The girls who wore these shoes were being held in a juvenile facility in SW Ohio.  Most were serving 10-day sentences before their court appearances. I worked with two groups of boys and two groups of girls.  The average age was fifteen or sixteen years old. Some were younger.

At times during my visit, it was easy to forget that these teens were behind bars.  They talked easily and thoughtfully about favorite books and pets and family members who meant a lot to them. We had conversations about grief and loss—and what it means to be an outcast like the character of Arthur Owens in my book, The Seventh Most Important Thing.

(Nearly all of these kids considered themselves to be outcasts.  Many had suffered the recent loss of at least one close family member.)

But there was no escape from the ever-present sound of their incarceration: metal doors slamming and locking.  It is this sound that always brings you back to the shocking reality that you are inside a correctional facility for youth.  The reality reverberates through the antiseptic halls. It sets your teeth and your brain on edge.

The sound was a constant reminder of the fact that these teens were not innocents—all of them had committed crimes.  Some serious, some minor.  In one of my groups, there was a boy accused of attempted murder.

In other words, this wasn't the Boy Scouts.

It is easy to be overwhelmed by the weight of the lost potential when you are sitting in front of these lost kids.  It is hard not to question: what went wrong here? Or how could we, as a society, have kept this from happening in the first place?  You can’t help thinking that maybe there has been some mistake and this shy, soft-spoken child shouldn’t be here.  You want to fix things—to erase the page.

In reality, you can’t.

That’s the tough lesson of juvie. You can’t fix very much about these kids’ lives.  Yes, some will be scared straight, but others will go back to worlds and circumstances you can’t imagine.  A fair number will end up in juvie again.

As a visitor passing through their lives, I knew I didn’t have much to offer.  I couldn’t change the circumstances of their lives. All I could give them was a break—a few hours to be someone else and to set free the creator, the artist, the writer, or the reader inside of them.

Using a box of Goodwill cast-offs, the teens created characters with me. We created characters from shoes that sparkled and lit up and ran the length of basketball courts and jumped in mud puddles.  There were no anonymous orange slip-ons in our imaginary worlds.  No forgotten juvie kids.  Every person was noticed—every shoe had a story.

In between the orange shoes in the blogpost photo, you can see the shoes that each girl chose to write about.  (I can tell you that there was at least one very gifted writer among this group.)  I like to think that maybe this photo illustrates the potential of these anonymous teens—the people who they might have been—and still might become.

And maybe it pushes all of us to see a little more.

Posted by Shelley Pearsall at 4:31 PM No comments: